Drought has begun to fade from the national conversation following a week of rain, but observations show that Dublin remains in the grip of the one of the most intense flash droughts, probably the most, since at least the middle of the nineteenth Century.

There are numerous definitions of drought. None are perfect. In Ireland we have tended to use an index called the Standardised Precipitation Index (SPI) (McKee et al. 1993). This makes sense in that most of the time it is a lack of rainfall that leads to drought in our relatively moderate climate. But there are other indexes such as the Standardised Precipitation and Evapotranspiration Index (SPEI) (Vicente-Serrano et al.2010) which, in addition, account for removal of water via evaporation and plant transpiration. This index is arguably better for characterising flash droughts that tend to occur in the warm season. It uses a combination of monthly rainfall and temperature records.

Phoenix Park is one of the longest continuous meteorological stations in Ireland. Records started in the early 1800s and continue through present. This long record is thanks to the significant efforts of Met Eireann, Ordnance Survey Ireland and others. Although instrumentation has changed over time, the site has always stood in the grounds of Ordnance Survey Ireland and the regional environment has remained largely unchanged. The precipitation series was homogenised by ICARUS as part of Noone et al. (2015). The temperature record has not been homogenised to date.* Met Eireann make monthly and daily summaries available. To perform the present assessment we have appended the July daily values aggregated to monthly averages** to the long monthly series and calculated SPEI-3 (a 3 month drought index) for the entire series. 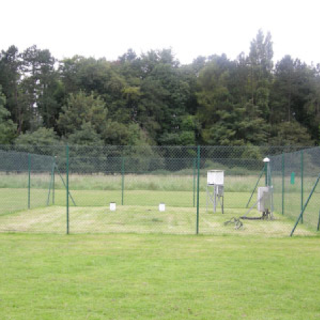 SPEI-3 at or very close to record levels

The provisional value of SPEI-3 for May to July is -2.70 which is the most extreme value on record, beating October 1995 by a whisker***. The next most extreme was August 1995. Before that the index values are sufficiently different to conclude that either 2018 or 1995 represent the worst flash drought since modern meteorological records began in Ireland, with 2018 marginally more likely.

One important thing to note is that the two most extreme prior months occurred in the same year. This shows that drought can appear to diminish only to quickly return. We may well have had a week of rain (although even that in Phoenix Park amounted to only 47% of the long term monthly average rainfall for July), but that does not even begin to undo months of deficit.

Table of the ten most extreme values of SPEI-3 in the Phoenix Park record. Negative values denote deficits. The more negative the index the more severe the drought conditions.

Perhaps more worrying still is the seasonal forecasts for the coming two months which show a real possibility of the meteorological set-up that led to the current drought returning and persisting. Don’t be fooled by a week of recent rains. We are potentially far from done yet. 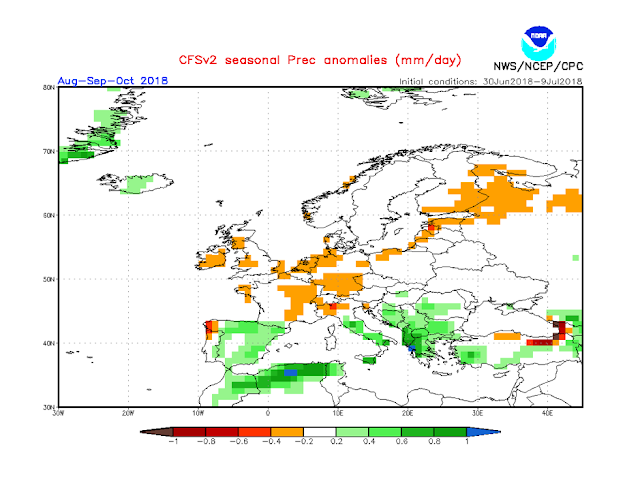 Current seasonal forecast output from the US National Oceanic and Atmospheric Administration CFSv2 system. Daily deficits of >-0.2mm/day are predicted. Note large uncertainties exist in seasonal prediction systems which should only be used as indicative guidance.

Posted by PeterThorne at 1:29 AM