Introduction
The team at ICARUS have been monitoring the monthly rainfall across Ireland to identify the onset of drought. The results showed that October, November, December and January were unusually dry months at many  locations. Although, rainfall totals during February and March returned to near normal levels across the island of Ireland some regions are still experiencing considerable rainfall deficits. Available monthly rainfall data was used to update 12 stations in the Island of Ireland precipitation series (IIP) (1850-2016) to end of March 2017. Figure 1 shows the location of all 12 IIP stations. The monthly rainfall for October to March at each location was compared with the long-term average (LTA) of the same months over the period 1850-2017. The average of all 12 stations was also established and presented as the Island of Ireland (IoI) series. Finally using the Standard Precipitation Index (SPI) the 6-month accumulative rainfall anomalies (SPI-6) for all the series January 1850 - March 2017 was produced. 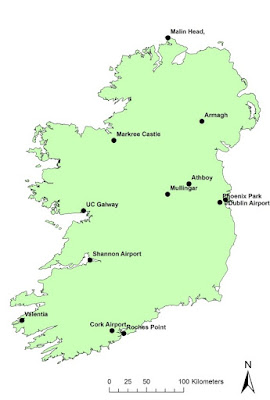 Figure 1 map showing the location of the 12 update IIP stations.

January 2017 rainfall
Results shows that much dryer conditions returned to most stations in January 2017 (see Figure 2) with the exception of those located in the south and south west of Ireland (Valentia, Cork Airport, Roches Point). The driest region was along the east with Dublin Airport and Phoenix Park receiving only 35% of LTA rainfall in January 2017. Markree and UC Galway in the west also experienced a relatively dry January with less than 50% of LTA rainfall. Armagh, and Athboy located in the east and north east also saw less than 45% LTA rainfall in January.

February 2017 rainfall
The rainfall during the month of February 2017 returned to near normal conditions mainly due to Storm Doris which brought heavy rainfall to most areas on the 22nd February. All stations received greater than 80% of LTA during February 2017(see Figure 2).  Mullingar and Phoenix Park received 20% more than average rainfall in February 2017. 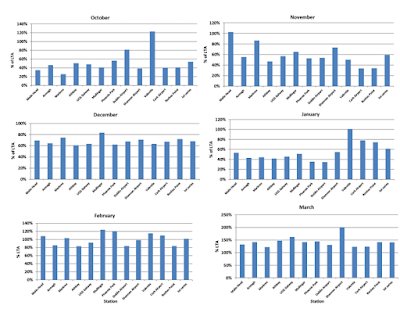 Figure 2 October 2016-March 2017 monthly rainfall as a percentage of the long-term average rainfall of each month over the period 1850-2017.

SPI-6 results
Although, we experienced near or above normal rainfall in February and March most stations across Ireland are still showing some significant rainfall deficits over the past 6 months. According to the World Meteorological Organisation (WMO) SPI values between 0.99 and -0.99 are near normal conditions, while SPI values of -1.00 to -1.49 is moderate drought, -1.50 to -1.99 is severe drought, and less than -2.00 is extreme drought (WMO, 2012). The SPI-6 analysis (1850-2017) results suggest that ten IIP stations are currently experiencing moderate drought.  All stations except Shannon Airport and Valentia show less than -1.00 SPI-6 month accumulative anomalies for March 2017. The results also indicate that the IoI series (12 station average) is experiencing severe drought with SPI-6 values less than -1.50 for March 2017. 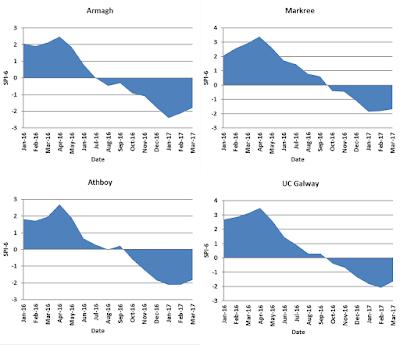 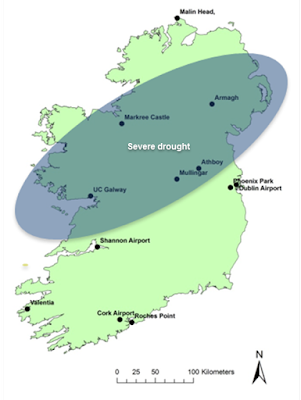 Figure 4 Shows the area that is experiencing severe drought as at end of March 2017 based on the SPI-6 values calculated over the period 1850-2017. Blue shaded area indicates extent of current severe drought. 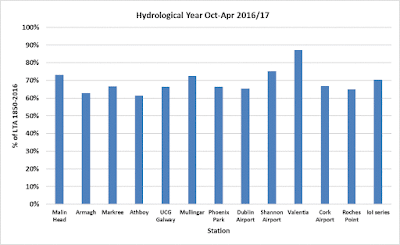 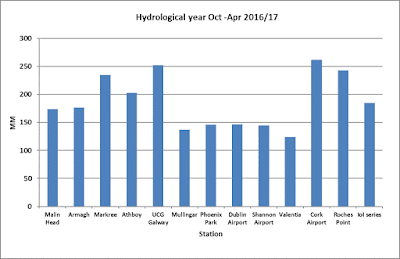 Final remarks.
The results of the drought monitoring indicate that some areas of Ireland (west, midlands and north-east) are currently experiencing drought conditions.This situation needs ongoing monitoring as many Irish rivers are groundwater dominated catchments and require winter rainfall to replenish storage. The results are suggesting that there are considerable rainfall deficits accumulated in many areas of Ireland due to a unusually dry winter. Therefore, if spring rainfall continues to be dry with below average rainfall certain regions of Ireland could be heading for a water shortages during the summer months.

Posted by Unknown at 7:01 AM No comments: