This is a repost for the International Surface Temperature Initiative blog

The analyses have been extremely long in the making. They started out back in 2010 as 'hobby' papers and never got explicit funding so trundled along very very slowly indeed. The release of the ISTI databank provided an opportunity to create a new estimate of DTR changes and compare it to several pre-existing estimates.

The first paper details the construction of the new dataset of DTR changes. This takes the version 1 release of the ISTI databank and applies the pairwise homogenisation algorithm (PHA) used by NOAA NCEI to these holdings. The paper deals with the homogenisation processing, analyses the resulting dataset estimates and discusses aspects of the underlying metrology (not a typo). Below are the gridded trends over 1951-2012 and the global timeseries. The 'raw' data is the basic data held in the databank. Directly adjusted is where the DTR series were presented to the PHA algorithm. Indirectly adjusted is where, instead, the adjustments to Tmin and Tmax are used. 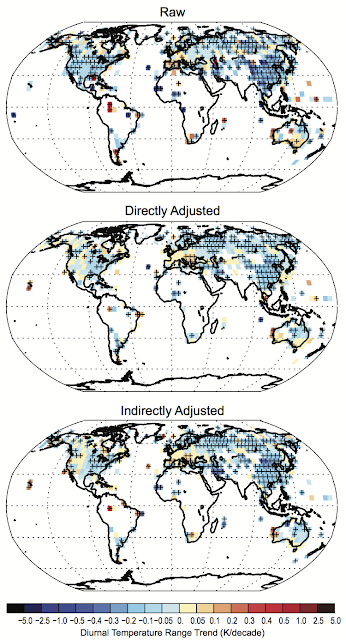 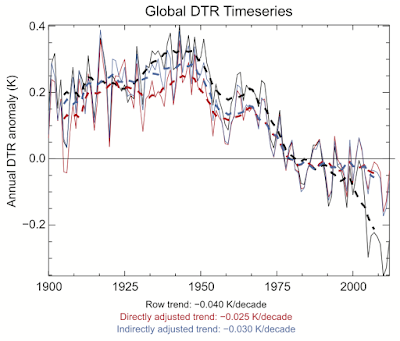 We found that more breaks are returned for DTR than is the case for Tmax or Tmin, for which more breaks are returned again than Tmean. This has potential implications for future homogenisation strategies in that searching for breaks in Tmean appears sub-optimal. Potential reasons for this were detailed in a prior ISTI blogpost and are further elucidated upon in the paper itself. 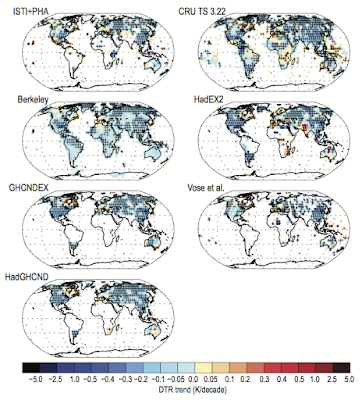 Much of the divergence between estimates results from the disparate approaches taken to accounting for incomplete sampling by the underlying data through interolating (or not) into data sparse regions. Using the native coverage (top) or the estimates restricted to common coverage (bottom) greatly alters the perceived degree of agreement between the independently produced products from various groups: 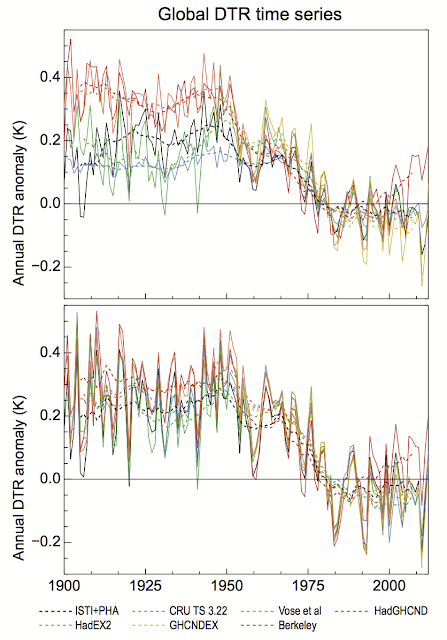 The conclusion of the second paper was as follows:

The driving rationale behind this work was the lack of explicit progress in the literature in assessing DTR changes between the fourth and fifth assessment reports of the IPCC. Based upon the findings herein, where a new assessment to be performed by IPCC of the observational DTR record at this time the text might read as follows (use of IPCC carefully calibrated uncertainty language and italicization [Mastrandrea et al., 2010] is intended).

It is virtually certain that globally averaged DTR has significantly decreased since 1950. This reduction in DTR is robust to both choice of data set and to reasonable variations in station selection and gridding methodology. However, differences between available estimates mean that there is only medium confidence in the magnitude of the DTR reductions. It is likely that most of the global-mean decrease occurred between 1960 and 1980 and that since then globally averaged DTR has exhibited little change. Because of current data sparsity in the digitized records, there is low confidence in trends and multidecadal variability in DTR prior to the middle twentieth century. It is likely that considerable pre-1950 data exist that could be shared and/or rescued and used in future analyses. All assessed estimates of global DTR changes are substantially smaller than the concurrently observed increases in mean and maximum and minimum temperatures (high confidence, virtually certain).


The datasets and code used are available via https://www.maynoothuniversity.ie/icarus/icarus-data
Posted by PeterThorne at 1:09 PM No comments: