A new paper by ICARUS researchers and international colleagues has been published in Climate Risk Management. The paper is Open Access.


Abstract
It is thought that direct personal experience of extreme weather events could result in greater public engagement and policy response to climate change. Based on this premise, we present a set of future climate scenarios for Ireland communicated in the context of recent, observed extremes. Specifically, we examine the changing likelihood of extreme seasonal conditions in the long-term observational record, and explore how frequently such extremes might occur in a changed Irish climate according to the latest model projections. Over the period (1900–2014) records suggest a greater than 50-fold increase in the likelihood of the warmest recorded summer (1995), whilst the likelihood of the wettest winter (1994/95) and driest summer (1995) has respectively doubled since 1850. The most severe end-of-century climate model projections suggest that summers as cool as 1995 may only occur once every ~7 years, whilst winters as wet as 1994/95 and summers as dry as 1995 may increase by factors of~8 and  ~10 respectively. Contrary to previous research, we find no evidence for increased wintertime storminess as the Irish climate warms, but caution that this conclusion may be an artefact of the metric employed. It is hoped that framing future climate scenarios in the context of extremes from living memory will help communicate the scale of the challenge climate change presents, and in so doing bridge the gap between climate scientists and wider society. 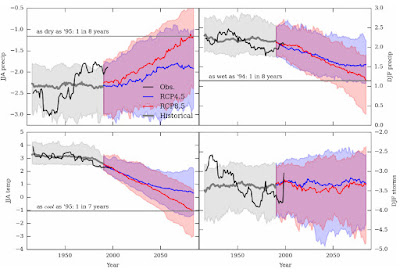 Fig. 8. Evolution of z-scores in the historical and RCP experiment calculated for centred, 30-year sliding windows. The shaded region of the CMIP5 ensemble spans 5–95th percentiles, whilst the solid lines provide the median. The discontinuity between the historical and RCP 8.5 medians is because only a subset of historical model runs continues to RCP 8.5. Note that the observed series are also displayed in each panel and the different scaling on the respective y-axes.

Posted by PeterThorne at 6:49 AM No comments:

Congratulations to (soon to be) Dr. Shaun Harrigan

Shaun has just successfully defended his thesis in a viva held at Maynooth. Congratulations, Shaun.

Here are details of the thesis completed under the supervision of Dr. Conor Murphy.

Exploring the Hydroclimatology of Floods: From Detection to Attribution


Uncertainties in projected future flood risk and challenges of detecting signals of change from observations highlight the need to advance process understanding through linking hydrological extremes to large-scale climate drivers. In Ireland, recent years have highlighted vulnerability to flooding yet little research has been undertaken exploring hydroclimatic signatures of change in extremes at different scales, in part due to a lack of quality assured data for relevant variables. This is an important research gap given Ireland’s sentinel position on the Atlantic margin of northwest Europe and is addressed within this thesis. The Island of Ireland (IoI) is classified into 3 Extreme Rainfall Regions (ERRs) reflecting distinct extreme precipitation climatologies, thus furthering understanding of physical flood-producing mechanisms. A comprehensive statistical trend analysis is performed on extreme precipitation and flood indices under a standard statistical framework. Results show a robust increasing trend in extreme precipitation magnitude, frequency, and intensity. Similar results are found for flood indices at longer time-scales but limited station density prohibits stronger conclusions. Atmospheric drivers of flood occurrence are reconstructed back to 1872 using an objective weather classification scheme and used to identify four flood rich periods: 1.) pre-1890s; 2.) late-1900s to mid-1930s, 3.) a short spell in the 1980s, and 4.) late-1990s onwards. The recent flood rich period is not unprecedented at the centennial time-scale. Moving towards attribution, the North Atlantic Oscillation (NAO) is found to modulate flood propensity, with strongest influence in the west and northwest. At the catchment scale the utility of an attribution framework based on the method of multiple working hypotheses is posited using the Boyne catchment as an exemplar. Results show the complexity of attributing hydroclimatic change at the catchment scale where the system is influenced by internal and external change. This work advances understanding of hydroclimatic flood processes and establishes important new datasets that together will be important for better managing current and future flood risk and open prospects for new management tools in Ireland, especially seasonal hydrological forecasting. 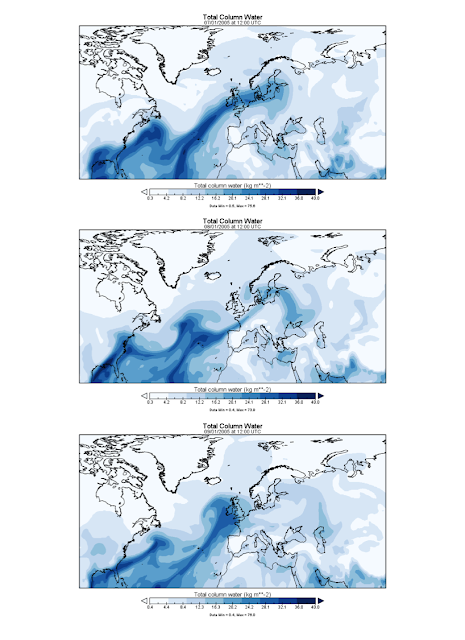 We can finally also give Shaun his mail without jinxing him ... 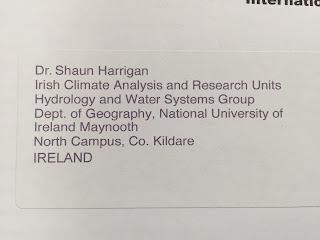 Prof. Phil Jones shall be visiting Maynooth University on Feb 19th and has agreed to give a lecture on aspects of his surface temperatures work. The talk shall be at 10.30 in Renehan Hall on South Campus.

Prof. Jones is the director of the Climatic Research Unit at the University of East Anglia. He was a Coordinating Lead Author on the 4th Assessment Report of the Intergovernmental Panel on Climate Change and has published over 400 papers.

Further details, including directions and the talk abstract, can be found in the talk flyer available at the following link. All are welcome. Please note that the room capacity is o.100.

Posted by PeterThorne at 2:35 AM No comments: