Ireland has a high proportion of the northern Atlantic wet and alpine and boreal heaths of high conservation value within Europe.  These upland habitats of and their associated oceanic species and vegetation are of high conservation value, but are also considered vulnerable to climate change.  For example, is anticipated that an amplification of the elevation-dependant warming already detected will accelerate the rate of change in mountain ecosystems, with the potential to exacerbate both the pace and the amplitude of extinctions of vulnerable upland species uniquely adapted to these habitats.

However, projections from different climate models vary markedly and local processes for upland regions are poorly captured, hence more localised modelling studies are required to inform management decisions.  Various modelling approaches have been used to convert species distributions into predictive maps, and bioclimatic envelope models (BEMs) are widely used.   However, confidence in the predictive power of BEMs is compromised by conceptual, biotic and algorithm flaws. Arising from this, the use of consensus methods is popular on the basis that they decrease the predictive uncertainty of single-models to give a probability distribution per pixel as opposed to a single value.

The use of BEMs for habitats is novel, and only a limited number of studies have applied these methods to landforms and habitats. In this work seven bioclimatic envelope modelling techniques implemented in the BIOMOD modelling framework were used to model Wet and Alpine and Boreal heath distributions in Ireland.  An ensemble prediction from all the models was used to project changes based on a climate change scenario for 2031 to 2060 dynamically downscaled from the Hadley Centre HadCM3-Q16 global climate model. The climate change projections for the individual models change markedly from the consistent baseline predictions.  Projected climate space losses (gains) from the BIOMOD consensus model are -40.84% (limited expansion) and -10.38% (full expansion) for Wet heath (Figure 1a); and -18.31% (limited expansion) and +28.17% (full expansion) for Alpine and Boreal heath (Figure 1b). 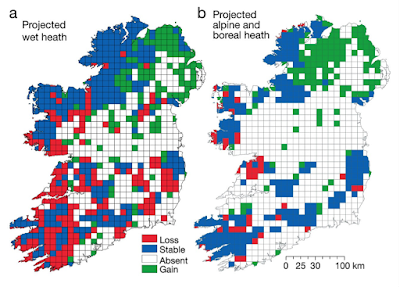 The projected decline and fragmentation of the climate space associated with heath habitats would
have significant implications for the ecology of these complex upland ecosystems and their associated species.  Results indicate that the distribution of wet heath habitats in Ireland is regionally sensitive to climate change, most notably for lower-lying areas in the south and west of the country. Increasing temperature and precipitation changes may reduce and fragment the area that is suitable for heath development.  Degrading heaths will also have an impact on the wider structure and function of the uplands as the overall mosaic of habitat types respond to climate change. For example, drier and warmer summers may increase the frequency, size and severity of uncontrolled fires, and drought effects may become more common later in the year. This may have severe impacts in areas already subject to pressures such as overgrazing, inappropriate burning, and loss of vegetation cover combined with erosion of the peat or soil.

Some attempt has been made to deal with uncertainty, at least in relation to differing results between the model categories, by providing the results from the individual BEMs implemented in the BIOMOD framework alongside the ensemble projection. Certainly, there is substantial variation in the results between the individual BEM types when the A1B scenario data are projected through the models.  Although only the downscaled output from 1 GCM and scenario has been used to project climate space changes, the methods lend themselves to using different GCM and RCM outputs from a range of scenarios to better encapsulate uncertainty. Thus e.g., given the importance of mean winter precipitation in all the BEM model families, if a wetter or dryer model or scenario had been used from the ENSEMBLES RCMs, the results projected via the BEMs could have varied further.

Such an expanded framework would allow the identification of adaptation strategies that are robust (i.e. insensitive) to climate change uncertainties, and would allow more confidence in identifying and targeting vulnerable areas of heath habitat for priority conservation management measures.  These sort of refinements would also help inform best practice conservation management, whereby limited resources could be directed to areas coincident with healthy and functional heath communities and projected future climate suitability.
Posted by PeterThorne at 5:01 AM